After becoming a first time homeowner in Sept 2003, I became interested in preserving the immediate neighborhood’s integrity, livability, and appearance. The circumstances are a bit unusual. The house I purchased was in a mixed-use, light industrial zone just on the edge of a residential area. The lot immediately adjacent became slated for development shortly after I moved in. The lot in its then state would be described by most as an eyesore. However, the boxy 40 foot high warehouse that was planned to replace it would also be unsightly.

What began with polite suggestions from myself and other neighbors, turned into an elaborate campaign against the proposed project. One could argue that the warehouse is ideal for its Mixed-Use Light Industrial Zoning, but taking a few steps back to look at the immediate context shows that a warehouse of that scale would be an unfortunate transition from the residential to light industrial zone, particularly since the site is surrounded on all sides by single story residences that existed there before the zoning did. After trying to hopelessly collaborate with the owner and architect, the neighbors collaborated-on, produced, and presented an alternate scheme to the owner and City of Berkeley. The thinking was that instead of just complaining and pointing out flaws in the owner’s proposal, it would be more proactive and positive to present a more viable scheme that made everyone happy. While the alternate scheme was rebuffed by the architect and owner, it showed the planning department how detrimental to the neighborhood the project as proposed would be.

The project was eventually voted down by the Zoning Adjustments Board. This was a victory for the neighborhood since the same project was nearly approved a year ago by the same board. The neighbors' presence and input were essential in preventing what they deemed an inappropriate project from being built. For better or worse, after the property owner illegally tore down the decaying house on the site, the property was sold and turned into a parking lot.

My contributions were the following: Helped coordinate neighborhood meetings + build consensus between the neighbors in opposition to the development in its current state, producing the alternate scheme, and working on presentations to illustrate the problem to the Zoning Adjustments Board and Design Review Committee. 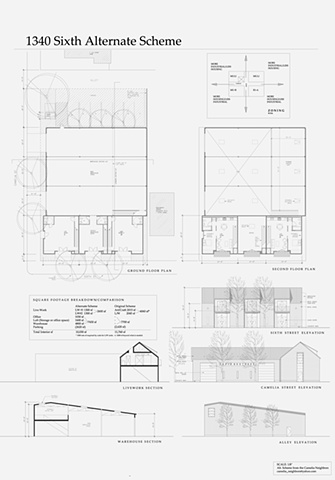